Posts from the ‘New Zealand’ Category 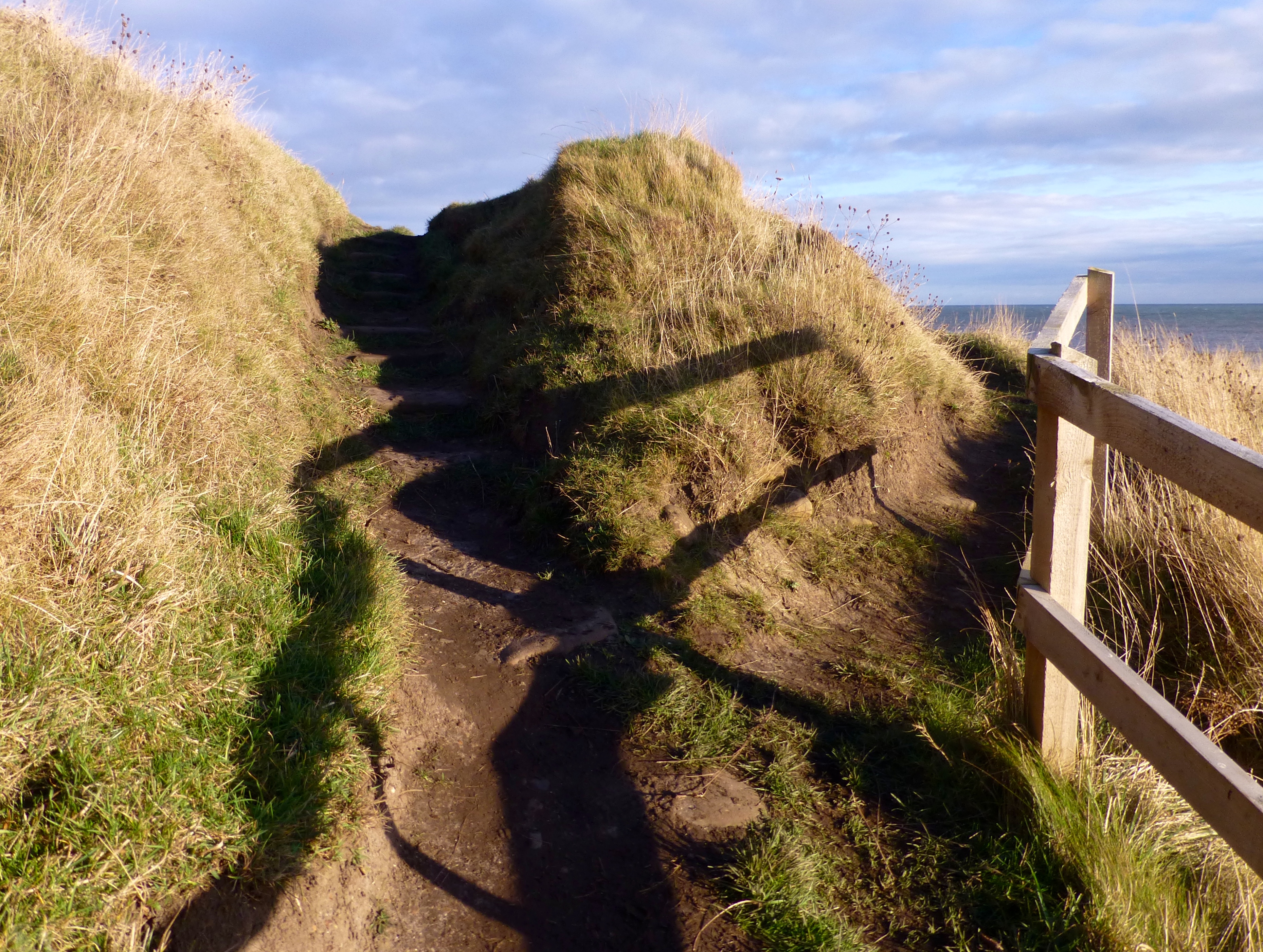 I took the first tumble of the year in this morning’s long shadows.

January’s low, cool sun accompanied me for seven miles along an empty coastal path. It was time and space enough to reflect at last on the year that has just ended. The year of words.

I’ve been absent here because work words took priority. They also took their toll. The day job on a newspaper; editing of broadcast interviews; tweaking the novel; updating Twitter; and checking in on Facebook . It left my eyes screen-saturated and begging for darkness.

There were a few short adventures in the hills I would have shared: a remote summer camp beside a Highland loch and autumn days spent climbing high for views above Scotland. But they were too few. My whole focus last year was on work. On not stumbling.

And now I’m faced with an enforced break. I have annual leave I need to use or lose, so tentative planning has begun for three weeks in New Zealand, a mix of catching up with family, wilderness walking and work.

When I tumbled this morning (to a soft landing), my head was somewhere along the Kepler Track, the high ridge route I walked with my son last time I visited. I was mentally packing my rucksack, locating my tent , boots, head torch and sleeping mat. Scotland’s mud and ice were 12,000 miles away. And then, quite spectacularly, they weren’t.

Reminiscing about the Ridge on a dreich Scottish day

I never tire of looking up to sharp mountain ridges but I’m nervous of exposure so New Zealand’s Kepler Track is well outwith my comfort zone. But with a bit of brutal encouragement from my son, I did it. The memories – which we shared last night via Skype – will last a lifetime. And they brighten the bleakest of Scotland’s November days. 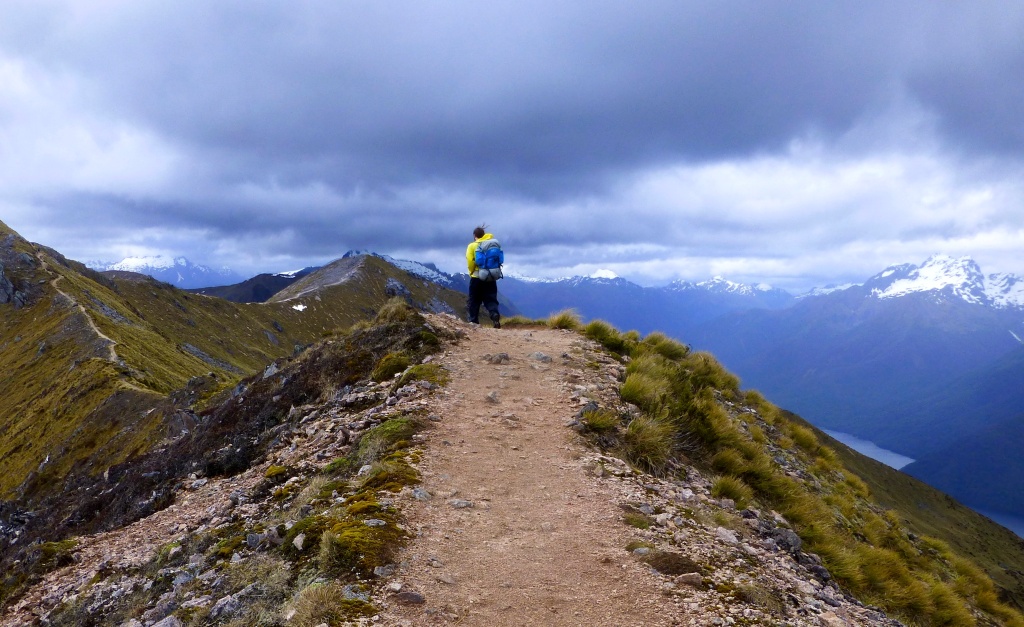 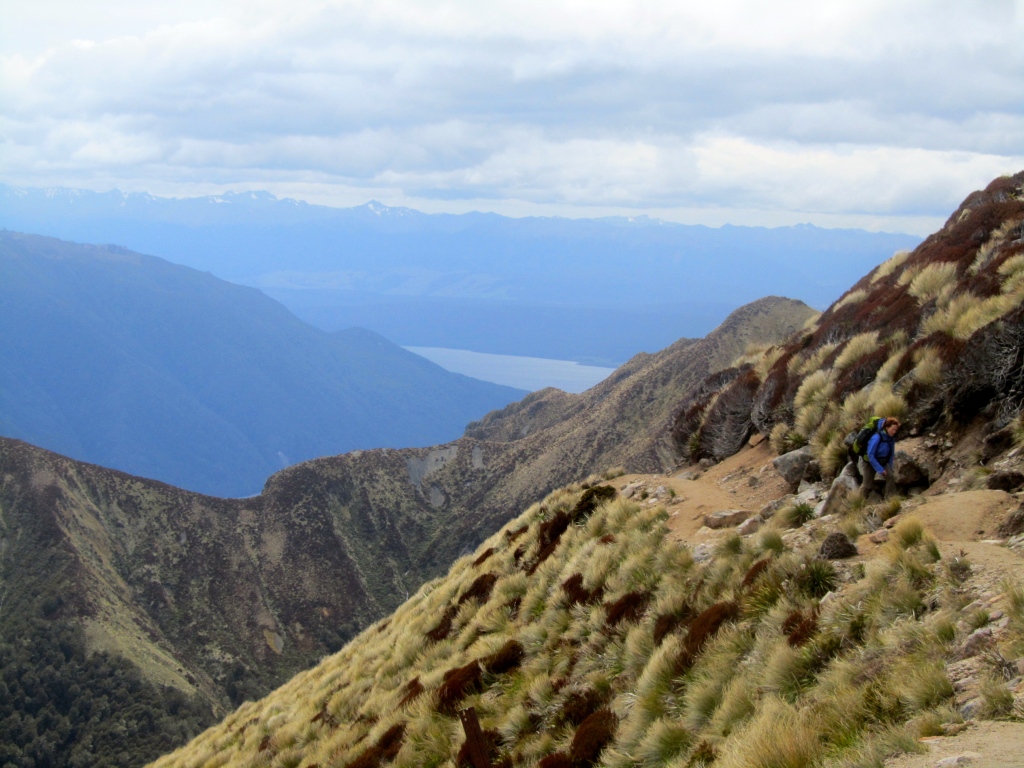 Home is … chocolate cake in the tin

But I’ve just finished decorating the cake I baked this morning because … he’s on his way back! Both my boys are coming home today – and what is home without a chocolate cake in the tin?

My mother baked every day when we were growing up. Like many Scottish families at the time we ate “High Tea” rather than dinner. Lunch was the main meal of the day and when we ate at 5.30pm, straight after the afternoon milking,  it was a savoury dish followed by a cup of tea and a selection of Mum’s scones, pancakes, “angel” cakes with sponge wings, sultana cake, and sometimes shortbread or Victoria sponge.

Occasionally there would be rich Sacher Torte or her pièce de resistance, an apricot tray bake which was in such demand at local  charity “Bring and Buy” sales, a black market formed amongst the local clientele and  it was auctioned and hidden before it ever reached the sale table! I have her (classified) shortbread and pastry recipes but I’ll never match her skill or lightness of touch.

I look back now and wonder a) how none of us became obese and b) how she found the time to bake on top of managing a large family and helping run a farm. The answer to a) is probably that we all did physical work on the farm and portions were small by today’s standards. And as for b),  I realise now that, in part at least, baking was her creative outlet. Mum never ate the cakes or sweet things herself and we took the home baked food for granted;  anything “shop bought” was regarded as inferior. Her delicious food was always devoured. But I wish we’d praised her more.

I’m living in a rented house at the moment with all my favourite dishes and utensils packed away in storage, so I’ve had to borrow the tins and the beaters today, and make do with strange bowls and tools. That’s my excuse for the cake not looking perfect.

But really, I doubt the boys will notice.

It’s one of my favourite places on earth.

The walk towards Mount Aspiring starts after 25 bone-shaking (well, in a 35 year old camper) miles up the glen from Wanaka in South Island, New Zealand. I’ve been thinking about it today with the ice still clinging to the high slopes as the first snow falls in Scotland. It’s not what I’m supposed to be thinking about, of course, but
the memories are  inspiring and will lead to great things tomorrow. Maybe.

The Maōri called it Titea, which means Glistening Peak and at 3033m high it’s well beyond my vertigo tolerance or walking capabilities. But not those of Major Bernard Head, a Welsh soldier who died, like so many others, at Gallipoli a few years after being the first to climb the mountain just over 100 years ago.

There’s a plaque to his

honour in the Aspiring Hut where we dried off and slept last November after the glorious but squally walk up the glen.  I’ve just watched some modern videos of the mountain and discovered that many climbers now hitch a lift in a helicopter up to the last couple of steep faces, yet it’s still a stunning achievement to reach the summit. Major Head and his companions must have been hardy men.

The view from my “bed” on waking up in the  Aspiring Hut has to be one of the best ever and only matched by unzipping a tent flap and peering out at lochs and hills in the wilds of Scotland. And I’ve only ever walked a couple of hours towards the mountain but I want to return and explore further up the valley past the waterfalls  that create Arctic swimming pools. Even the lower ones are irresistible. For a short time at least. 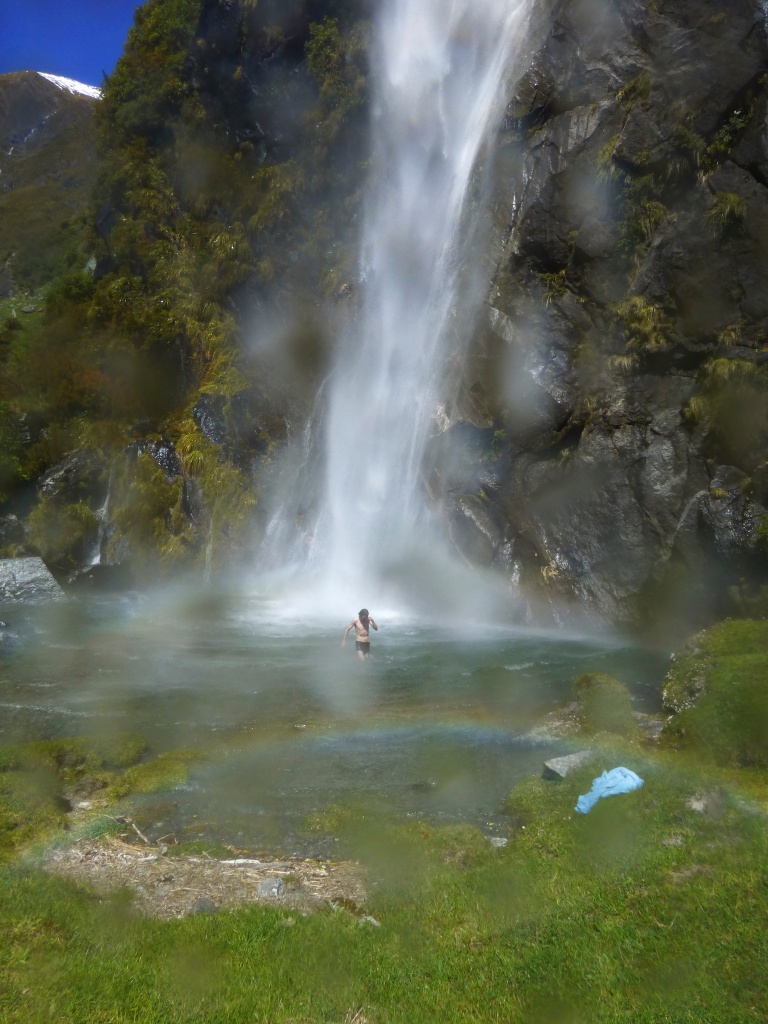 The Mount Aspiring National Park is home to the famous Routeburn Track, one of New Zealand’s Great Walks in the Southern Alps. It takes 3-4 days to make the hike which has a series of well-spaced huts.  I walked the Routeburn 27 years ago, carrying not only a pack with all my gear but also a five month foetus all the way up to the 4500ft divide. I hope he appreciated it.