Stretching the miles to Muxía 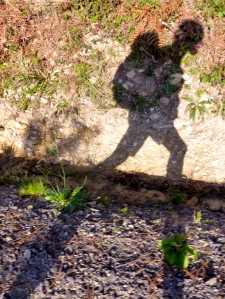 The walk to Muxía was long, lush and memorable for its scents. Wild fennel grew abundantly along the borders of the paths when we finally tore ourselves away from Finisterre, after waiting for the sun to rise, admiring John’s freshly created Camino tattoo, checking in at the supermerado for fruit and bread, and saying “hasta luego” one last time to old friends about to scatter across the world. We walked on through the haze of aniseed. It conjured up incongruous images of Pernod in smoky Parisian cafes.

In the deep thick woods and on farm tracks there was the moist autumnal morning scent of ferns, then freshly cut wood, stacked and guarded by dogs at a sawmill. I saw more large dogs on this stretch than any other, and they were often loose and haughtily territorial. We eyed one another suspiciously.

And then suddenly a familiar smell from childhood; the imprinted aroma of sodden hay that’s been lying in the field too long. It was a hazard of Highland summers but seemed impossible in this climate, yet there it lay, flat and dark in shady rotting rows. 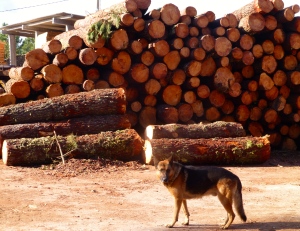 I’d read that this extension of the Camino was poorly marked but I think someone must have just been out with a yellow paint spray because the arrows were strong and clear, all the way to Lires, and the solitary  cafe that was midway on the 30km route. It was just as well I’d had no breakfast because the tortilla served on a huge bocadillo would have fed three – generously. There must have been at least six eggs involved in its creation. I gave it my best try.

I loved the walk over moorland and through the woods but near the end of the long day our route joined the main road and skirted the beautiful Lourida beach where pilgrims were jumping from sand dunes and paddling in waters that are too treacherous for swimming. It felt like a long, weary haul on the hot tarmac through the outskirts of town to find the tourist office where old ladies knitted and another compostella was granted with evidence of stamps from my pilgrim passport. The best hostel in town is Bella Muxia and just beside it is A de Lolo restaurant which serves the poshest pilgrim grub I’ve ever come across! The wine is good too.

But now we’ve reached the end of the road and will have to get a bus back to Santiago tomorrow. There’s still another sunrise to look forward to in the morning  though, maybe up on the rocky hill above the town, and the legendary stone boat down by the sea to explore. It’s not over yet. 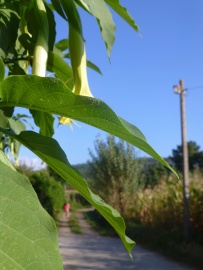 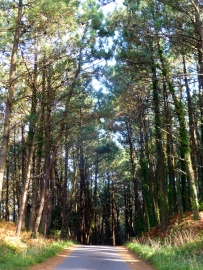 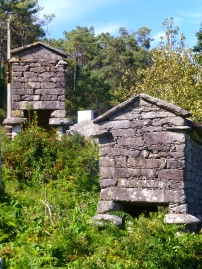