Rivers, ruins and bridges: the road from Santiago to Negreira 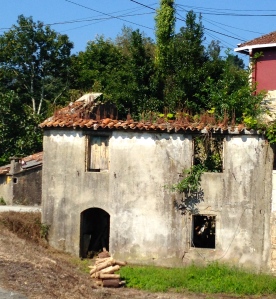 There weren’t many pilgrims on the road this morning. Or maybe they’d all left early, leaving us trailing in their wake. My friends Doug, Pam and John certainly did. They intended to leave at 6am, they told us over paella in a restaurant in the old city last night, in order to get to Negreira before the heat of the afternoon. I felt only a momentary flicker of guilt at my decision to loiter until daylight then daunder alone through the outskirts of the city, past the park and along empty paths.

It was a stark contrast to the Camino Frances where there were always people alongside, ahead or behind, the crunch of a boot on gravel or soil, the sound of voices or a swish of a cyclist screaming Buen Camino. But I enjoyed the peace and the ruins of old buildings so close to the city,  the living decay of stones covered in ivy and roofs burst open by growing trees. The medieval Ponte Maceira over the river Tambre was an oasis. There were palm trees, a still heron on a stone, clear water still running through the ruins of a mill.

It was only  22k to Negreira but for a first day it was enough. My feet were hot and my legs ached for the final kilometre we trudged through the hard pavements of the town. Our Australian friends had 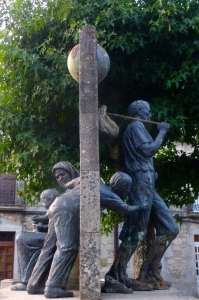 secured beds in the Mesquita albergue and I chose an upper bunk as far as possible from the known snorers in our midst.Friendship can be a fickle thing when decibel levels transcend even the finest earplugs.

But before sleep we needed  food, drink and … exercise! So we meandered beyond the supermercados and modern buildings to find a shaded park and a disturbing sculpture of an emigre leaving his family, a symbol of the waves of emigration from Galicia all through the centuries. It was reminiscent of so many paintings of the Highland clearances, the woman clutching a baby, an older child tugging at his father’s clothes, imploring him to stay. But in this one the father’s legs appeared to be rotting and his skin hanging off. Maybe he’d have been advised to stay behind and let his much healthier looking wife set off to seek her fortune? 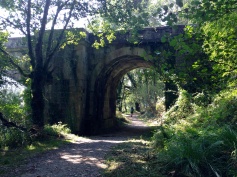 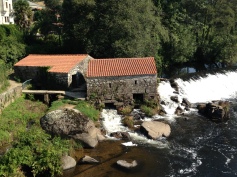 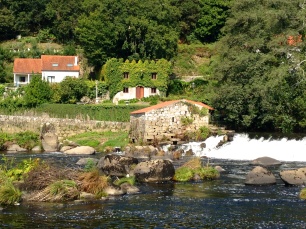