Too sweet to eat?

“I simply must touch it’s curly wool and give it a cuddle,” the woman cooed, pushing past me. “They’re sooooo beautiful.” Her wide-eyed husband appeared equally besotted. “Like teddy bears,” he murmured, as he joined the stampede. “Adorable.”

And that appeared to be the universal reaction to the sheep breed dubbed the “cutest in the world” when I went to record radio interviews at an agricultural show  yesterday. Even the dyed-in-the-wood (no pun

intended) Scottish farmer who’d imported them from Switzerland admitted that he’d fallen in love with them. And if the attention at the show  was an example of the public’s reaction to his new enterprise, he’s on to a real winner. But for sale as pets, not pies.

They’re called Valais Blacknoses, they look like giant cuddly toys, they wear giant tinkling bells round their curly necks  and the spectators who hung around desperate for a cuddle (with the lambs, not me) were so carried away they made fabulous interviewees.

Never work with children or animals, they say, but the latter sure works for me. And yeah, I can’t deny it, they are pretty cute. 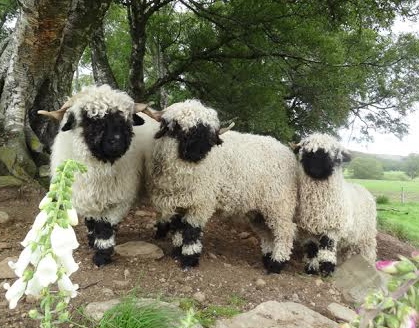