The Inchnadamph Hotel is host these days to walkers, fishermen and tourists but in the 1880s two men stayed here overnight and their work in the Assynt area was to change the understanding of the earth’s internal structure for ever. They were the celebrated nineteenth century geologists Ben Peach and John Horne whose signatures in the visitors book are proudly displayed in the hotel.

Such is the importance of the ancient rocks in these hills the area will always be a magnet for geologists. There were a few in the bar in the evening but breakfast was shared with other walkers and fishermen who were, like us, excited about their plans for the day. We daundered up the road, stopping to look round Assynt Church and its graves, poking about the MacKenzie stronghold

of Calda House then out to the stark ruins of Ardvreck Castle, the 15th century seat of the MacLeods of Assynt.

Finally we tore ourselves away from the crumbling walls and set out across the old Marble Road over the hill towards Unapool and Kylesku, a route that was used to transport marble quarried nearby in the early 1800s. Our alternative route delving deeper inland to a waterfall looked wild and magnificent on the map but the rain had started and we knew we would see little of the scenery in such conditions.

Our constant companion now, dominating the views to the west, was the multi-topped topsy-turvy mountain of Quinag with its fresh snow covering. Then, as we walked along the main road, our focus changed to Loch Glencoul and the famous “Glencoul Thrust” on the hillside across the loch. It’s a stunning example of “young”  540 million year old quartzite sandwiched between two layers of Lewisian gneiss which is 3000 million years old. I quote the figures we read on the info board but struggle to understand the forces that shuffled the

rocks below the ground to create such a feature and have no comprehension whatsoever of what 3000 million years (or even a million years) might look like! But it’s still awesome information so I stared across at the rock for a long time trying to imagine the excitement of Peach and Horne as they made their discovery then their struggle to change established opinion. Younger rocks below older ones? No wonder Assynt has played host to international geologists ever since.

We were drenched when we reached our B&B late in the afternoon but soon ready to venture back out into the night for the mile-long walk to the Kylesku Hotel’s restaurant for some delicious fish and chips. And then it was back on with the boots, waterproof jackets, leggings, hoods and out into the pouring rain, up the road to bed. 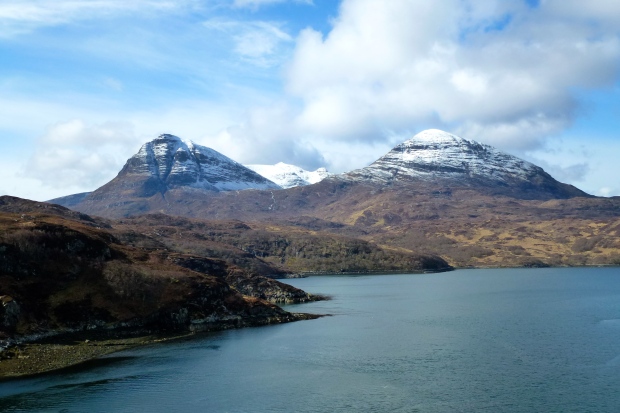